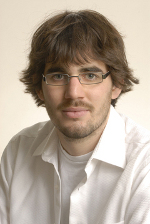 I am a medical data analyst at Roche. Previously I was a graduate student in the Department of Statistics and Actuarial Science at University of Waterloo and my advisor was Wayne Oldford. I can be contacted by email.